The Re-emergence of Nick Holmes, Research Turtles Update, Gary Heffern's Beautiful People Video and upcoming albums you should check out..... 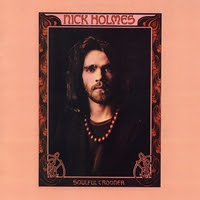 It's the early seventies and the whole world of music is blowing up.  Musicians are becoming stars (a precursor to stars becoming superstars) and music itself is getting serious.  FM is changing the way we listen, AM is adapting to a changing culture and it means something because music, like they say, is the background for our lives.

In NYC, an obscure group of musicians, jazz and otherwise, are taking part in an experiment which will spawn a number of session men and musicians of no small stature in this new world and out of this will come an album which will go pretty much unnoticed in spite of its excellence.  The band is tagged White Elephant as is the album, a double-disc rule-changer regardless of its obscurity.  The songs, rehearsed and recorded over a period of time, feature no less than The Brecker Brothers (Michael &Randy), Michael Mainieri (who produced and arranged the sessions), Steve Gadd, Tony Levin, Hugh McCracken and a raft of others.  They vary from straight rock to intense fusion, at the time a mere germ of a genre, and they changed the way I listened.

Up to that time, jazz was to me a genre to be avoided.  I wanted loud and I wanted electric and I wanted melody and harmony.  I wanted something other than lounge music or free-form noise (I called it squawking geese music in my lack of experience and ignorance).  I wanted--- well, I didn't really know what I wanted but I knew I'd know it when I heard it.  I heard it on White Elephant.

I heard raucous jazz jams and hippie anthems and the oddest version of Auld Lang Syne I'd ever heard.  I heard drumming to rival the best of the rockers and guitar that stretched the boundaries and horns--- oh, those horns!  But mostly I heard Nick Holmes.

Nick Holmes was an unknown quantity, but for me he brought the music home.  He wrote songs like I'd never heard and sang them like no one I'd ever heard, though there was this strange aura of John Martyn and Nick Drake in his phrasing which captivated me.  His songs were laced throughout the album and, at first, I skipped from one Holmes song to another, avoiding the others.  They were gems--- melodic, poignant, magical--- and Holmes sang them to an imperfect perfection.  I listened to them so many times that they became ingrained in the brain and to this day I can hear the music in my head and get a rush whenever it happens.  Others had their chosen hits of the day, but I preferred Battle Royal and Gunfighter and More To Love and Right Back, all (to myself) Holmes classics.

Without Nick Holmes, I would have missed the rest of the album.  Through the process of dabbling between Holmes tracks, I slowly developed an appreciation for the more jazz compositions--- The Jones, with its manic Bob Mann shredding of the guitar and overamped Tony Levin bass, and the other strange conglomerations that I came to call "hippie jazz" for lack of a better term.  Through repeated listenings, I learned to love the whole album and, from there, opened myself more to jazz.  White Elephant was a landmark album for that reason alone.

A year or so later, Holmes released a solo album, the outstanding but ill-fated Soulful Crooner.  Again produced by Mainieri, it had that jazz edge but toned down and not unlike the Holmes tracks on the White Elephant album.  Of course, by that time I was sold, but Holmes upped the ante.  He wrote and Mainieri produced a musical treasure.  From the first notes of Only a Human, I knew this was special.  Behind Holmes was a combo version of White Elephant--- Donald MacDonald on drums, Tony Levin on bass, Mainieri on keyboards & vibes, and Hugh McCracken on guitar.  And the guest appearances!  Few, but fitted to the music and the moment.

By now, you can fathom that I am a Nick Holmes fan.  Indeed, since the epiphanies of the aforementioned albums, I have searched for any and all information I could find about him.  I scoured used record bins, talked about him when I could get people to listen, listened to the albums on a lesser but regular basis to get my fix and never gave up.  A few years ago, I ran across a MySpace page which I was pretty sure was the right Nick Holmes (there are other musicians out there by that name) and tried to contact him through that but nothing came of it.  Sometimes when I would search for that page, it wasn't there--- not in the place I was looking anyway.  Holmes was like a ghost--- this elusive Casper-type entity whose existence I would have begun to doubt but for the physical proof I could pick up and listen to when the need arose.

But if I am nothing else when it comes to my music, I am persistent and a couple of weeks ago I hit the jackpot.  I found him.  I had been putting his name in search engines fairly regularly and to no avail, but this last time, there he was.  Well, not him, but his website.  I learned more about Holmes in one sitting than I'd ever been able to find out--- his attachment to The Serendipity Singers and Gamble Rogers, the release of an album on United Artists Records titled Hunger Is the Best Sauce (in all my years scouring record bins, I don't believe I have ever seen a copy), his involvement with the White Elephant gang.  In the '90s, he played in a band called The Neurosurgeons and worked with Diane Keaton and others.  He had a studio (I assume he still does) and recorded music.  Hell, he has other albums!  What the hell?

I sigh.  How talent like Holmes goes missing for, what, decades?  But I found him.  With luck, I may be able to get him to talk about his story.  It's a sure bet that I will be picking up all the music I can get my hands on.  And there is a little.  He has four songs posted at present on his website (just follow the link and click on "music"), three albums available through cdBaby (Soulful Crooner, The King of 26th Street, and Low Ball) and, if I can talk Holmes and Mainieri into it, we might see a release of another Mainieri-produced album, Freedom Slave.

I know there are a few people looking for Holmes out there.  Hopefully, they will fall upon the info I did and find their way to the music.  Michael Mainieri, by the way, has a ton of great jazz albums available through his NYC Records label, including the White Elephant album (with an additional Nick Holmes track).  There are some true classics by the likes of Steps Ahead and others and, of course, Mainieri's solo albums as well.

My boys from Lake Charles are getting ready to unleash Mankiller Pt. 1 on the world, an EP of their latest tracks produced by Justin Tocket at the same studio where they recorded their self-titled album (one of my all-time favorites already).  The plan is to allow free downloads of their "single", Bugs In a Jar, beginning May 3rd and continuing through that month.  Release date for the full EP is May 31st.  Like all good plans that could change, but until it does that's the plan.  In the meantime, for those who don't know, Research Turtles knocked down the song of 2010 honors from the UK's Radio Six International.  Here's the video:

We break into what I already had planned for a short announcement regarding the impending release of Jill Stevenson's latest project.  Her last two, The Jill Stevenson Band and Where We're Not (with Adam Widoff), worked their way into my psyche enough to place them on a number of my "best of" lists (here is my take).  If the new one is anywhere near as good as those, it's going to be a killer.  You can check out Jill's music at her website where it is streaming 24-7.

I knew Gary back in the days which would lead to The Penetrators, the golden days of San Diego.  He was a kid then, exuberant about the music he loved (mostly punk during that phase) and convinced that he would soon be fronting a band.  I left SD for Seattle and the next thing I knew, a Penetrators album crossed my desk and, sonofoabitch, there was Gary.  He made it.  A lot of water has run under the bridge since then.  Gary had some ups and downs, but his music kept him going.  He has just wrapped up an album of music which deserves more than a cursory listen.  Gary's older now.  Life for us both is not the same carefree life we had led in SD.  You can hear it and feel it in his latest work with Gary Heffern's Beautiful People.  Check out this video--- Hand of the Devil.  It makes my point.  Album available soon from Glitterhouse Records.

I admit to having a bit of a crush on Mariana Bell, but it is a musical crush.  I listen to music all day long and it can be a bit wearisome at times, but I am always in the mood to hear Mariana.  She's a modern pop type singer and songwriter and another one of those dreaded Charlottesvillain's you hear me rave about at odd times.  She has a touch for melody and writes as pure a modern pop song as I've heard and did just that on her upcoming release, Push.  It is a solid album (I stole a CD-R and have been listening since) and will be available April 26th.  Here is a video of "the making of" the album.  You can hear bits of the album as background music but you'll have to take it from me, it's not enough.  Hearing the whole album convinces me that 2011 is another great year in music.  God love the indies!

This is going to be one hell of a year, musically.  Bright Giant is slowly piecing together its next project, Nine N Out just released theirs (their best yet), and holy crap!  I almost forgot!  Ash Ganley recently finished another in a string of fine albums (this one's titled Magic Season).  Dennis Crommett's (The Winterpills, whose Tuxedo of Ashes fries my brain) In the Buffalo Surround just hit the shelves and I am doing my pee-pee dance awaiting Zoe Muth's next offering.  There are too many releases of real import to keep up with, but I will do my best.  If you want to see where I've been, you can log on to my website, Rock & Reprise, for a rundown of music I think worth checking out.  I don't take solicitations, by the way.  I search out and write about only the music I deem worthy.  FYI.

I know it sounds like a Madison Avenue slogan, but let me say, buy indie and support the indies.  These guys aren't getting rich and they're every bit as good as anything the labels will hand you.