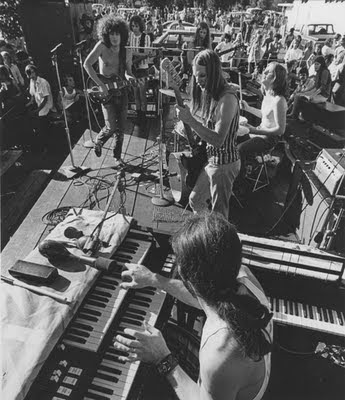 Before I get to the meat of this post, let me say one thing:  Notary Sojac was one of the best bands to ever grace the Pacific Northwest.  Ever.  There were others, of course, but none related to their followers as much, none took the music more seriously nor did any lay down as solid a footprint.  Their history is one of idealism and music taken to an extreme with few regrets, if any, for the mistakes made and the goals unmet.  It is a story you have to hear to understand and one day, if I can ever get my shit together, I will write it.  I have the notes and I have the music.  All I need is 401 gallons of coffee and the time to weave the pieces together.

For now, I will talk about them as if they were mere footnotes (they were not) because many of you don't know Notary Sojac and the magic which surrounded them.  Most of you never experienced the pleasure of sitting around Skinners Butte Park on a hot weekend afternoon, watching and listening to NS and Portland cohorts Sand give you a high no joint could match.  Most of you missed it.  It was a supernova which lasted only a few years but was so intense that it created a legend of its own.  No album (though one was recorded), no Hall of Fame (though many of the musicians around Portland and Eugene at that time would gladly vote for their inclusion), no money.  They were communal, loose and, more than that, all about the music.

They didn't just happen, though.  The various members played in their own towns and within their own circles until the stars aligned.  Steve Koski, in fact, spent a few years honing chops until he was ready.  He moved to L.A. for a short time in 1968 to replace The Weeds' guitar player, who had been hospitalized.  By that time, the band had turned into The Lollipop Shoppe and had released an album on UNI Records.  Steve stayed with the band, recorded a few songs with them and when they returned to Portland, they morphed into Weeden.  I mention this because Koski recently ran across some Weeden tapes, buried amongst memorabilia of the Sojac years (Younger brother David had them.  Wottaguy!) and cleaned them up as best he could.  They are rough and recorded during rehearsals, probably with a single mike hanging from the ceiling.  The sound is muddy and the music cuts out here and there and the mix is nonexistent.  And they're some of the best damn tapes I've ever heard from that period.

The first nine tracks reek of the psychedelic folk scene of the time, just singer Fred Cole, singer/guitarist Ron Buzzell and Koski, who also sings and plays guitar.  The songs vary from schizophrenic to folk pop and beyond and could have been background music in any of the underground stoner movies of the day, at times bordering on the folk side of Love and at others the rock side of Barry McGuire.  Cut to shot of beautiful lithe long-haired blond girl wearing flowing and flowery dress riding bicycle down a side street in San Francisco, long-haired dudes turning heads to watch as she passes, sun shining, life good.  You know.  The American version of Georgy Girl the hippie version of Midnight Cowboy--- salt lightly with folk/psych and simmer.  As rough as these recordings are, as hard as Cole struggles to hit certain high notes, I find these songs intriguing at the very least.  In fact, the more I listen the more I'm intrigued. 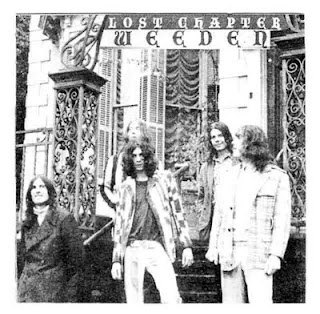 None other than Jack Meussdorfer (Sand) broached the subject of Weeden during a conversation a few years ago.  You ever see them?  No.  You missed something.  They were the band we all looked toward.  They were way out in front.

In front, indeed.  A cursory listen to the next eight tracks confirms it.  This is the electric side of Weeden, straightforward and in your face.  Fred Cole gets a chance to turn loose (he was a bit reluctant to let go on the acoustic tracks, possibly due to the way they were recorded) and the band?  Jesus!  This is schizophrenia in a whole other way.  Amps cranked, band wound tight, they give you what for, psychedelic style (which today would probably fall within the 'jam' category).  What Are You Gonna Do? has a touch of later Notary Sojac mixed with early Santana, maybe.  Tim's Song is, indeed, Tim's song, a nine-plus minute jam which gives drummer Tim Rockson room to solo (seems like everyone was doing it back then) and Shoutin' At You is pure Pac Northwest garage.  Crazy Now is a Koski original which he would drag out on occasion in later years, first with Notary Sojac and later, Sojac.  Gettin' a Piece starts out normal enough before turning freak-out.

Then there is Carolina.  Carolina was the song which impressed me most that afternoon at Skinners Butte Park.  It had something that few other songs I had ever heard had---  a free-flowing jam-based feel that I couldn't even begin to describe.  A rolling bass, riffing and solid drums, fantastic organ and three guitars ripped me a new one and I was sold.  Well, folks, this is where it came from and how cool is it that I can hear it pre-Notary Sojac and in its "original casing".  Undoubtedly, when NS got hold of it, they started putting their individual stamp on it, but it's the same song with somewhat the same feel.  NS, during the years they were together, motored through a number of originals and covers, tossing some to the curb and adding others to keep the sound and feel fresh.  I thank the gods that they kept Carolina.  Every single time I saw them, I waited for it and was thrilled by it.  It's not like I could go home and put it on the turntable.  No album, remember?

Koski does something very interesting to cap the Weeden collection off--- he MIDI-izes the first two tracks on the CD.  Burgess Home and Burgess Blend are arrangements taken from the old Burgess Home Weeden track and recorded in 2010.  Koski always was adventurous as hell when it came to music and I get it (and I dig it).  Add a redone 2010 version of Weeden's Without You and there you have it.  A look back from the heart and soul of Steve Koski.  He was not all there was to Weeden, but he is the one who is keeping it alive.

An aside:  When researching and gathering notes for this little dip into the underground,  Koski contacted me with this little bit of trivia.  While he was in L.A. with the Lollipops, he co-wrote two songs with Fred Cole.  He explains it this way:   "Two songs from the movie, Angels From Hell, which I co-composed and performed on, were released on a soundtrack LP in 1968 or 1969. (No longer available, I'm sure....very obscure.) We played at a "love-in" type of rock festival in the film, but only a few seconds of the group are on screen).  They are also on the compilation CD, The Weeds, aka The Lollipop Shoppe. Curiously, I am not listed or mentioned in the CD liner notes nor as co-writer on the two songs (Who's It Gonna Be? and Mr. Madison Avenue)."

I have no idea if anyone out there remembers Weeden.  Until I heard this CD, I had only heard about them.  This is real roots music--- the roots of The Warloks and Notary Sojac.  And I am now wondering if anyone has some old Warloks tapes sitting around.  I can only hope.

If you do remember Weeden, I would happily forward any requests you might have to Koski.  If you are as intrigued by the old music, raw and alive, you might be able to talk him into marketing it in an "as seen on TV" kind of way.  Maybe.  What the hell, eh?  Worth a shot.

And that statement about no albums?  It is basically true.  Notary Sojac released no album during their short existence.  They did, however record one.  There are plans to release it when the funds become available.  In the meantime, you can purchase a double-CD package of rough tracks recorded live during the '72-'73 period.  Cheap, too.  Sample the tracks first.  Like Weeden, they were not recorded for release, but it sure makes me happy that they released them.  Here is the link.
Posted by frankg at 3:54 PM